In 1982 a friend had a flat-mate who exotically came not from Hampstead Garden Suburb, but from Brighton.

This glamorous girl told us that she knew Green Gartside from home and that he had dedicated a song on “Songs to Remember” to her.

What she couldn’t remember was whether it was the first track on side one or on side two. Either Faithless or The Sweetest Girl. 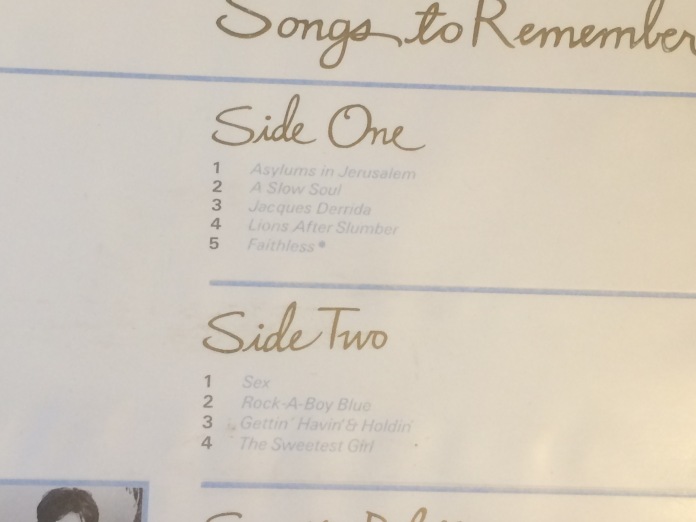 So it is only fair that I talk about Scritti Pollitti’s latest outing.

We are at the Roundhouse. It is familiar and welcoming. It has been in my gigging blood since it was a dive in the 70’s, and nice and near to home.

We are seated in the round. A lovely set up. I couldn’t be more comfortable and excited.

We catch a glimpse of the support – Rory. Butler. Seems like a nice talented boy. Sang a song of unrequited love for his lesbian house mate. 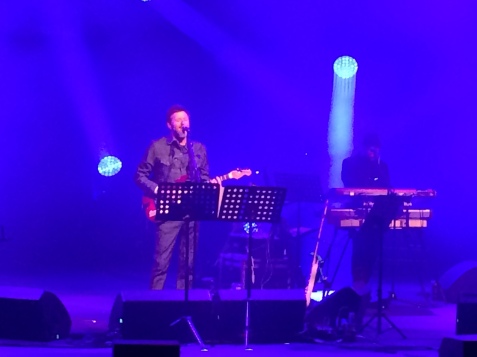 Green Gartside hops on stage. Tall and bearded in double dark denim, he is still hot in an adorable way.

It is well documented that he has suffered from serious stage fright, but he has somehow overcome it by talking about it, being self-depracating and generally chatting.

And oops, there is a problem with his guitar strap. As they fiddle to fix it, he jokes that this is exactly why he hadn’t performed live for so many years.

Starting off with The Sweetest Girl, he explains that his influences at the time were Kraftwerk and Gregory Isaacs. He asked them both to guest on the trac

He received a  sweet note from Jamaica, but not a word from Germany. Years later he met up with the Kraftewek chaps and asked them what happened. They said “We Hate Reggae”.

His schtick is to tell a jolly story about each of the songs as they are performed. We hear about a baleful sheep, misunderstanding the funk, mispronouncing the titular philosopher and collaborations.

We learn that The Boom Boom Bap is basically about his love hip-hop and beer., How a song started with Joni Mitchell’s guitar in Hollywood, finishing in NewportGwent.

For the first time, the tight, and I suspect long suffering, band performs Oh Patti and Asylums in Jerusalem and we were very glad to be there to witness it.

My pal Nikki remarks that Gartside has the voice of Disney (while again remarking that his is still hot). And it is true in the best possible way. The voice of an angel smothered in
loveliness.

So apparently in 1978 Scritti Politti recorded a song that wasn’t ready, no lyrics nor tune. To fill the void they played Radio 4 over it and hoped for the best. 38 years later, Harriet Cass, the voice of the BBC, agreed to re-record especially for this show. And there she was in the audience to enjoy an updated hectic and rollicking live debut of 28/8/78.

The next treat was a medley of new songs, all promising marvelous things for a forthcoming album.

In case we got overexcited, we were instructed not to applaud until a Guinness can was raised a second time. We held back. And clapped big time when we were permitted.

There is nothing but pure goodness in Wood Beez and Aboslute. A happy way to finish.

We are told “You are awfully nice” for the encore. Against tradition, there are no greatest hits, instead we get a couple of new songs never heard before. “Dog is dog and cat is cat”.

Thank you GG and SP  from all the fan girls and boys.